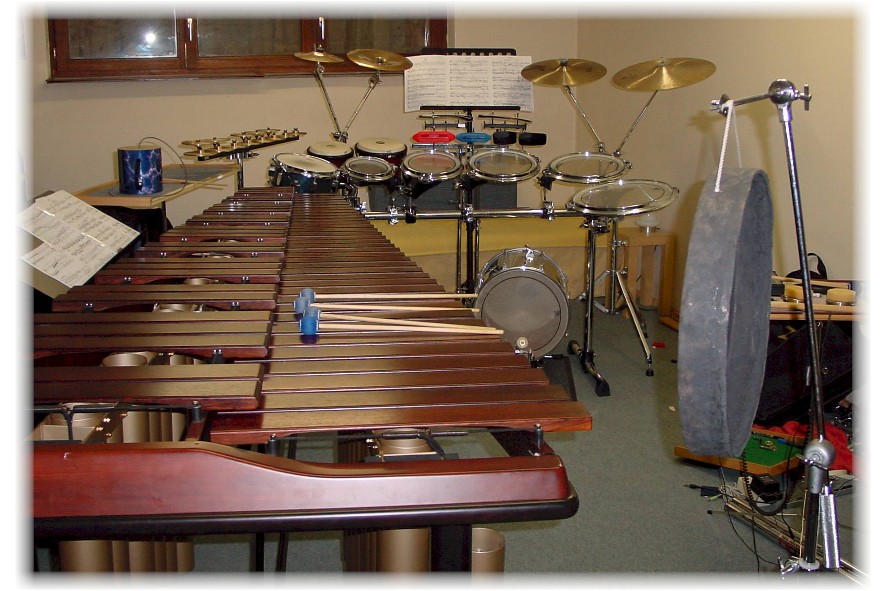 Concerto for Marimba/percussion and wind ensemble
composed in 2003, Duration: about 16-17 minutes

IMPORTANT NOTE: This piece has been composed ON the percussion set-up as shown below. This means that some of the passages (“licks”) might not be playable if the set-up is not assembled EXACTLY as the composer has requested – many passages will not feel comfortable and logical unless the proper instruments are used and assembled in the indicated way. For some players is more suitable to turn the whole set-up right to left. thna the LOW toms comes on performers LEFT side, and bongos are on the right. Flats MAY be used, but REAL toms with resonance heads sounds cool too. CLICK HERE TO SEE PHOTOS OF THE SET-UP as used by Benjamin Toth on the world Premiere performance and also a newer version “on the Rack” as he is using today.

Have also a careful look on the details about the Cowbells and Plastic blocks. It is very important that the ORDER from
left to right is exactly as shown on the photo. If you have difficulties with some fast licks in second movement (on percussion)
you may consider a MIRRORED REPLACEMENT of all instruments. (except marimba of course) In that case, make sure that you also
change cymbals, plastic blocks and cow bells accordingly.CLICK HERE TO SEE PHOTOS OF THE SET-UP as used by Benjamin Toth on the world Premiere performance and also a newer version “on the Rack” as he is using today.

WIND ENSEMBLE: (ALL WOODWINDS MAY BE DOUBLED, but not on SOLO spots)

For percussion solo and wind ensemble

In a spring of 2002 I was commissioned to compose a piece for one percussion soloist and wind ensemble. Commissioner was a consortium of 12 universities from USA led by University of Hartford , Hartt School of Music. Schools conductor Glen Adsit, and percussion Professor Benjamin Toth, requested a piece that would be a real challenge for a soloist, showing well the possibilities of Marimba as well as of percussion, and also leaving some space to the orchestra and especially to its percussion section to “show up”. Since the solo part has been composed ON the set-up, it really uses all possibilities and colors of the choosen instrumentarium in very effective and hugely virtuosic way. Therefore is also important for soloist to build his set-up exactly as indicated in order to make all “Licks” playable. In a little less that a year later after a commission, a concerto was finished and premiered in Hartford in April 2003.

“Tales” is a musical story that is drawn from an oriental Balkan-like mood. Even if the large formal structure of the piece is divided in two main sections, there are many “little Tales” in-between such as dreamy cadenzas for the marimba and winds and an Egyptian-sounding groove in the „tutti” passages.
After the „oriental” awakening introduction the music moves into a slow dance written for the marimba, which I like to think of as a “Camel-Groove”. The dance is developed and leads into a tutti climax, which is broken by a crack of the whip. After a cadenza on marimba and a brief reminiscence of the Camel-dance, the first section ends quietly in the sounds of cymbals reminiscent of “deep-water waves”.

The second movement is connected „attacca“ and begins with low drums and two tubas. This is immediately supported by a slow uneven rhythm in 5/4 plus 9/8. The percussion grows slowly and adds a touch of mystery. In generally, the second movement is energetic and supported by strong rhythmic pulses, often performed by the whole ensemble in unison. Volcanic like eruptions start in the percussion section and together with a soloist, lead to a percussion cadenza.
“Tales from the center of the Earth”, has purposely been composed in rather tonal musical language with more progressive harmonies featured in the second movement only.
In less than a year after its premiere it has already become very much performed among the orchestras. In just one year after the premiere, it had over dozen performances with different orchestras only in USA.

Please sign up for latest news and our newsletter